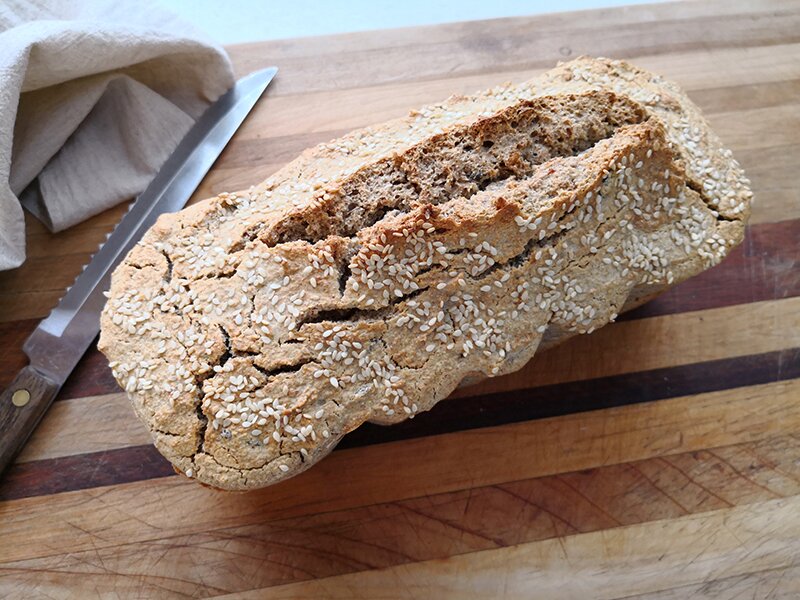 If you’ve been following my blog for a while, you might be surprised to learn that my gluten-free sourdough starter is now languishing in neglect at the back of my fridge since I discovered fermented buckwheat bread (poor thing!).  Since making my first experimental loaf, I have baked only buckwheat bread, because not only is it delicious (even my kids switched over without complaint! that’s a good sign 😉), but I’m convinced that it is the most affordable, healthiest, and easiest-to-make bread option I’ve found till now.

Fermented buckwheat bread contains only three ingredients: buckwheat groats, salt, water.  To those, you can choose to add what you like for flavour and texture. I always add soaked sunflower and pumpkin seeds to the loaf, and sprinkle sesame seeds on top.  I once stirred raisins and walnuts through it, which the kids really liked.  But the simple sunflower, pumpkin, and sesame seed loaf is my favourite, so I don’t really feel compelled to experiment much more with other ingredient combinations, to be honest! Although the bread is fermented, it doesn’t require any living starter, which means you don’t have to feed anything between bakes – a major plus for those of us who don’t have the inclination or are not very good at remembering to feed sourdough starters!  It takes just a few minutes to prepare the ‘dough’ before baking, but it does require a lot of resting time (soaking, and then fermenting).  I love that the bread contains no gums (eg. guar or xanthan), it requires only a few ingredients (= simple pantry), and it’s made from a whole seed and not a processed grain.

Yep, you read that right. Buckwheat is a seed, not a grain – although it is commonly referred to as a pseudo-grain. It is therefore gluten-free, has absolutely nothing to do with wheat (despite its name), and while it consists of mostly carbohydrates, it is high in protein and fibre, as well as a range of nutrients and anti-oxidants. I like the idea that the main source of grains in my diet is now a buckwheat-based bread because I am half-Japanese. Buckwheat has been part of the Japanese diet since prehistoric times – in Nihongo it is called “soba“. In Japan, they commonly use buckwheat to make soba noodles (and note that these days they usually mix in a bit of wheat to improve the texture). It makes sense to me to lean towards the kind of foods my grandparents ate, as I search for foods that will nourish and not irritate my digestive system.

Another great aspect of this bread is that you can make it with organic ingredients, and still achieve a gluten-free, gum-free, naturally-fermented bread for a really affordable price. For those of you who are on a tight budget, it might be helpful to know that each loaf requires 3½ cups of buckwheat groats, which equates to around 670g of groats. At $6/kg you would therefore need to spend around $4 on the buckwheat groats, plus the cost of 1 tsp salt, and any seeds/nuts you might want to add. My finished loaves weigh around 1400g.

I definitely prefer eating my buckwheat bread toasted, and I absolutely love it topped with extremely generous quantities of homemade pesto! 😋 But I have, on occasion, sneaked some nut-butter sandwiches into the kids’ kindy lunches and I was secretly surprised that they ate them with about as much enthusiasm as their usual GF banana pikelets, so the bread must be quite tasty to them without disguise.

I would like to say that I invented the whole concept of fermented buckwheat bread, but of course that isn’t true. This recipe is a derivation of the possible original one (there are lots out there) at: www.consciouscatering.ca.  I hope you love it as much as I do – if you give it a go, please feel free to share your feedback via the comments at the bottom of this post!

As with all fermenting, I recommend avoiding metal dishes or utensils. I personally use a large ceramic bowl and a wooden spoon. I bake the bread in a silicone loaf pan because the greased glass loaf pan experiment was an epic fail - the bread stuck to the sides in a major way! I had to chisel it out with a knife... You could also use baking paper to line your loaf pan of course.

And so you can get an idea of the texture…!