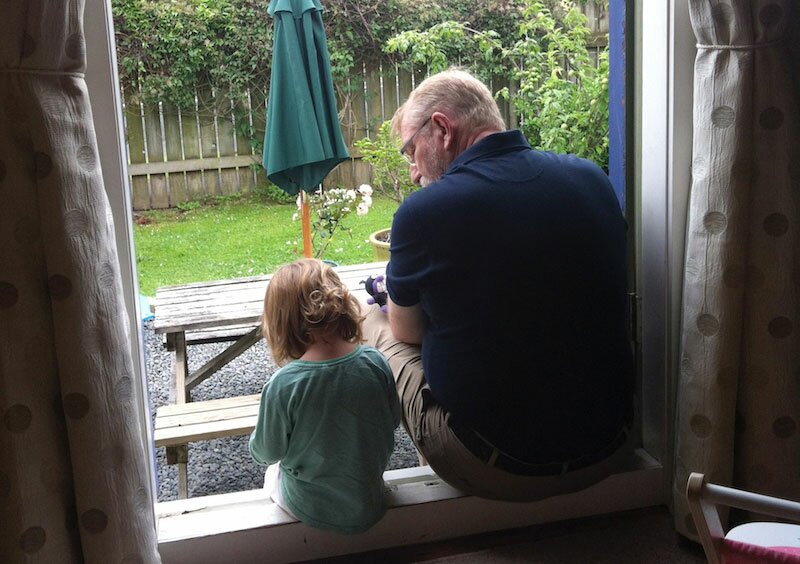 The other night at dinner, Stella snitched on her Poppy (my father-in-law).  My husband laughed and explained that his father had snuck her a licorice lolly, whispering “Don’t tell Daddy!” with a wink.  I rolled my eyes at my husband and said to Stella, “Well, aren’t you lucky! What a treat!” and let it go.  (Sort of).  I didn’t grow up with grandparents but I know this is what grandparents (are supposed to) do, and although I don’t really want Stella to eat junk, I remind myself that no child was ever irreparably damaged by the indulgences of doting grandparents like hers.

But I did wonder what motivates her grandparents to steal her what they consider to be little delicacies, I consider to be little morsels of poison, and they know to be junk, over and over again.  They act as though they can’t resist doing it, even though they know why we don’t want our children to eat junk, and even though they can see the children don’t particularly want or need it (at this young age ignorance is bliss, you see!).  I think what confounds my generation of attentive parents is that our parents (now our children’s grandparents) never let us eat junk, especially not when we were three!  Frank and open discussions about diet, health, processed foods, and the personal and social cost of junk fed to little kids don’t seem to have much effect in quelling our parents’ desire to ply their beloved grandchildren with lollies, ice cream, or chips, even when they wholeheartedly agree with us on the matter! (In their defence, Stella’s grandparents are actually very restrained and only sneak the odd thing to her when we’re not looking.  In our defence, our children are by no means deprived of sweets and treats; in fact, they get plenty. It’s just all homemade, often probiotic, and refined-sugar-free).

My husband and I agree that without the overwhelming sense of responsibility that comes with being a conscientious parent, the grandparents simply desire to be the perfect grandparents for their own child-selves.  When they were children, it was such a rare treat to be offered a lolly or to be able to eat hot chips; the sort of experience that was so infrequent and special that it is now ingrained into their memories as some of the happiest in their childhoods.  That makes sense to me, and I understand that emotions that are cemented in our childhood are incredibly difficult to shake as adults.  It also makes me wonder what I will annoy Stella and Daniel by doing when I am a doting grandmother.  Perhaps I will be sneaking my little grandson a forkful of sauerkraut, chuckling “Don’t tell mummy! Hee hee!” while Stella throws her hands up, saying, “Mum! Stop it! You know he only eats printed food!”

As parents, it is so clear to my husband and me that our children adore their grandparents (all of them), and that their adoration has almost nothing to do with sweets, treats, or gifts.  Stella’s grandparents are the best kind because from the moment she was born they gave her the only thing a grandchild’s heart desires from a grandparent: undivided attention.  We live in a society which now overflows with junk – food, toys, clothes, accessories, the list goes on…  As such, a grandparent’s desire to sneak or lavish such gifts on their grandchild seems perverse to many of us parents.  Times have changed; sweets aren’t a rarity anymore.  Quite the opposite, in fact.  It is now very difficult to keep your child from eating them. Every. Single. Day.

But one thing hasn’t changed with the times, and I don’t believe it ever has.  I don’t believe it’s different in other cultures and societies.  The best grandparent a child ever had or dreamed of, was one who gave them their undivided attention. Who spent time with them.  Who listened to them.  Who talked to them (boring though their stories may be 😉 ).  I’m writing this down in the hope that I will remember these thoughts when I’m a grandparent myself.  And that while I may be fixated on the sauerkraut and on sneaking it past my exasperated daughter’s rolling eyes, what my grandchildren will be enjoying more than the gift of the food itself will be the gift of my time; my attention; my intention.

If you’re a doting grandparent, why not celebrate Junk-Free June by gifting your grandchild your undivided attention?  A conversation, an experience, a letter… these are all junk-free gifts that will be cherished by both of you, forever.