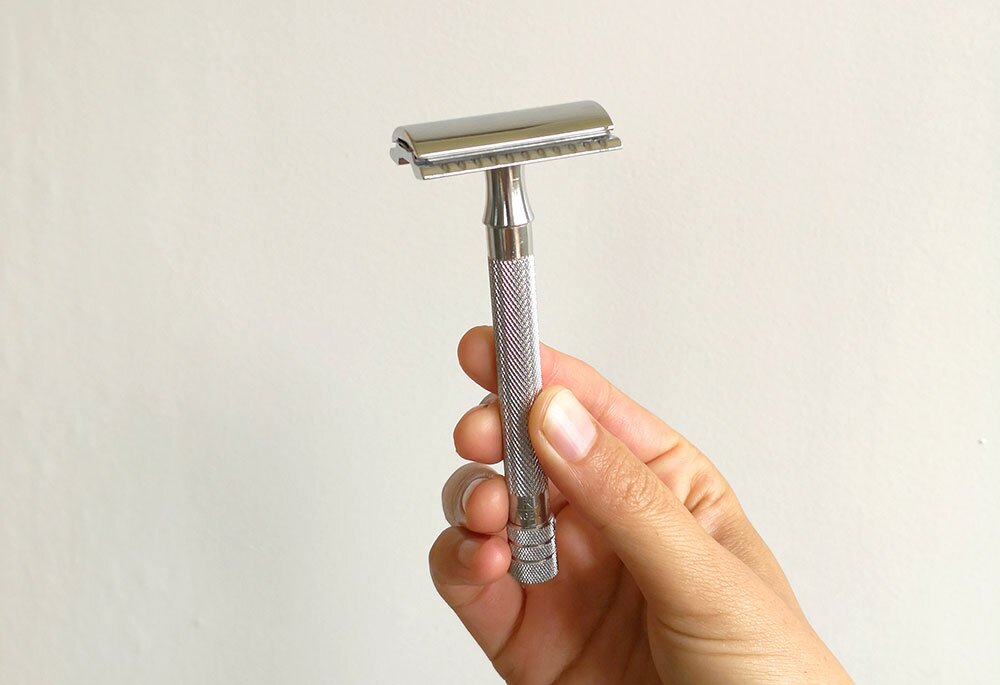 I’m sure I’m not alone when I confess that I bought my first double-edge safety razor (after extensive online research on the best safety razor for ladies, of course!), ooh-ed and aah-ed at its beauty and then posted a photo on Instagram, received lots of comments and admiration about how eco-friendly I am, and then proceeded to leave it on the shelf for a few months while I eeked out as many last-shaves with my disposable plastic Bic razor… Why? Well, in spite of its undeniably attractive design and understated elegance in my mostly unplastic bathroom, it was a very intimidating little object. The blades are so blooming sharp and they just glisten in the light to accentuate the fact that they could draw blood in less than an instant of bad razor handling by me. I watched some YouTube videos of women demonstrating how to shave one’s legs with a DE safety razor and although they were trying to demonstrate how easy it is to shave with one, instead it came across as very fussy and risky indeed! Apparently one needs to proceed very slowly, preferably in the bathtub (of which I have none), with shaving foam/cream applied generously (which I don’t use), rinsing the blade after each stroke (how tedious!). Most of the time I am shaving under extreme time constraints, because for some mysterious reason the kids often find themselves needing my urgent and immediate assistance whenever I’m in the shower and I’ve spontaneously decided I’m going to attend to my hairy legs…

Well eventually the Bic razor got to the point where my legs were just as hairy after a shave as they were before, so there was no avoiding the fact that either I needed to let my armpits and legs go au naturel (my husband wasn’t keen) or it was time for me to suck it up, put my money where my mouth is, and give the scary safety razor a go. I shaved in the shower, using conditioner on my skin first, and making sure I was very gentle, letting the weight of the razor do the work. The first time I only did my legs, but I had no nicks or cuts and boy oh boy, my skin was soooo smooth! Like a baby’s bum 😊. So the next time I plucked up the courage to shave my bony, scrawny armpits, and again – no nicks or cuts! I’ve been shaving with my Merkur for about 6 months now, and it hasn’t nicked me once! In fact, my relationship with Merkur has been so uneventful that my husband became intrigued and snuck a go with it on his face and neck. In one close shave, he too was converted. I bought a pack of 100 Astra razor blades (I chose this brand because they have a good reputation but also they are packaged plastic-free) for less than $30 and I reckon it will last both of us for a couple of years at the rate we’re going. He hates how expensive the cartridges are for the disposable razors – sometimes it’s cheaper to buy a whole new razor than it is to buy a pack of cartridges. So he thought it was a great idea for me to sell the Merkur in my Mrs Goodness shop, and spread the word of its awesomeness.

Unfortunately, finding a supplier in New Zealand wasn’t the easiest thing to do, and just to complicate things, the supplier of the Astra blades doesn’t stock the Merkur brand. However, they do stock Mühle, which is also a highly regarded German brand of razors, and their products are manufactured in the same city as Merkur. I decided in the name of research to buy and try the best-selling Mühle R89 myself – it’s the most popular safety razor in the world apparently! I thought I had better try it myself before promoting it in my shop as the next best thing, especially as these razors are expensive enough that you wouldn’t want to buy a dud.

So the beautiful rose gold Mühle arrived the next day and I quickly hopped in the shower and shaved my legs and armpits with it. The rose gold handle looked very beautiful on my shower shelf, although its shorter handle made it a little more awkward to hold. The shave was OK (as in, not amazing, just acceptable). I went out for the morning, running errands and such, and then on the drive home my shin started to feel itchy… So I itched it a bit, which of course made it itchier, and by the time I arrived home both shins were covered in horribly itchy welts!!! aaarrgghh!!! I assume that was razor burn, yowzers! I wet my hands and rubbed salt on my skin, which you can imagine was very painful, but I’m of the opinion that a bit of searing pain is better than unbearable itchiness haha. The salt actually calmed my skin down fairly quickly but oh man, I was cured of ever wanting to use that razor again. Oh, did I mention I shaved my armpits too? 😫😫😫 Ah, but I figured it could’ve been my bad technique – perhaps I rushed it, put too much pressure on, perhaps it just doesn’t work for legs? – and so I urged my husband to give it a go on his chin/neck. Poor thing. He had little bloody nicks all over his neck – I felt bad, so I advised him to use salt to calm the skin down… 🙄 he he.

So it is that my husband and I are both convinced that the Merkur 23-C is a BRILLIANT double edge safety razor for anyone who is switching from disposable plastic razors and/or who has big hands and/or is planning to shave their legs/underarms/bikini line with it. And this is why:

Although it involves an initial investment, I am sure that this razor can last me till the end of my shaving days and maybe even be used by the next generation! It’s almost 100% plastic-free (darn that little plastic window in the box!). It’s super cheap to maintain, has a timeless design, and has replaceable parts. In fact, it ticks so many boxes that I found myself wondering how I got to the age of 40 without ever seeing anything other than a plastic razor…? Until recently, I had always assumed that the plastic razors were ubiquitous because of their superiority – superior shave, superior affordability, superior convenience… etc. But no, I don’t now find that to be the case at all. So I’m a bit baffled, and I can only assume that plastic razors have come to dominate the shaving world due to one quality, and one quality alone: disposability. Indeed, many of us are now getting really sick and tired of junk, waste, and obsolescence being planned into a design. But in the 70s and 80s, disposability was a THING. A very cool thing. Not having to expend energy on maintaining something was a very desirable quality in a design. We weren’t aware back then of the pay-offs – millions of plastic razors scattered over the earth or in the oceans for an eternity being one of them…

I guess the most sustainable answer is actually to let one’s hair grow, but in lieu of that option I really do recommend (a good) safety razor! Here are some of my tips and tricks, as a novice user who has had one unfortunate experience:

Although this is a blog post that really promotes a product I have in my little shop, I hope this doesn’t annoy you. My intention is to share my own experiences in a way that others can learn from, whether they end up buying things or not. I would hate to think that someone has bought an expensive razor with the best of environmentally-conscious intentions, only to have a horrible experience and conclude that safety razors in general are nasty, evil things that don’t work for their bony/chubby armpits! I will also emphasise that my bad experience with the Mühle razor seems to be a complete aberration – it really is the most popular DE safety razor out there and it has thousands of devoted fans (men and women alike). However, the Merkur 23-C seems to be the most popular razor for women, and I guess that is because of the long handle which makes leg shaving much more comfortable. 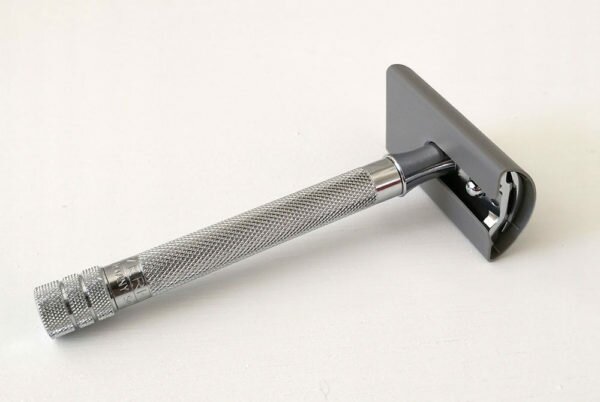 PS. It’s an extra and it’s plastic, but I really do recommend Mühle’s plastic blade guard (it fits the Merkur too). It makes me feel a bit easier about having a curious little boy with curious little hands in the same house as my super-sharp razor… and I guess it would make travelling with a safety razor easier too.