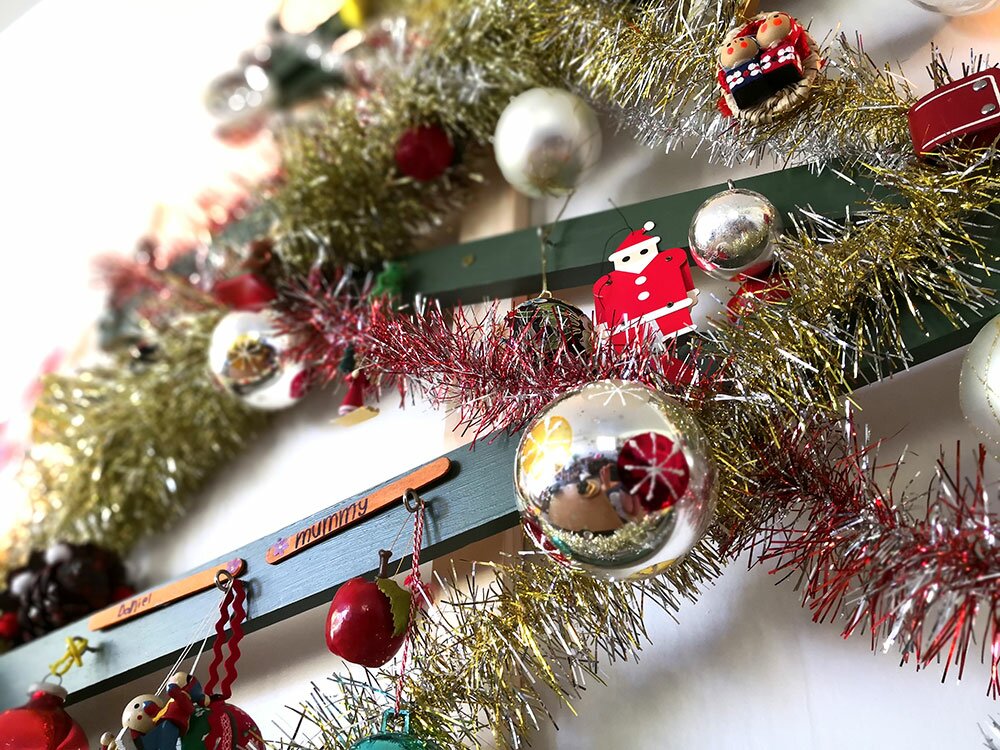 A couple of weeks ago I had the pleasure of meeting a genuinely lovely journalist from the NZ Herald to talk about how we do Christmas here in the Vreede family. He himself is beginning his own journey of low-waste living and asked me some very pertinent questions such as, “How do you reconcile your ideas of living with less, buying less, and low-waste living …with having a shop?” (I have given this question much thought over the past couple of years so I had some answers at the ready, but they will wait for a future blog post). Anyway, the ideas-sharing conversation that ensued was the main reason why I agreed to do the interview (publicity scares me a bit you see).  A week later I got to see the edited clip of “The Vreede Family Christmas” and I am officially in awe of his ability to condense approximately 2 hours of me talking, into a two-minute snippet for the paper!  But it made me realise that I have lots of thoughts on Christmas, particularly the gift-giving part of it, which people won’t get to see/hear unless …I write a blog post about it! And what better way to break my months-long hiatus of blogging than to write one about how I’m getting ready for a GOOD Christmas! (OK, well maybe not completely Good, but Better).

Christmas takes on a whole new meaning when you have children. It’s fairly easy to experience a low-key, low-stress Christmas when it’s just you, your partner, and your dog – well, it was for us anyway. Neither of our parents minded too much that we didn’t shower each other and the dog with gifts at Christmas. However, enter Grandchild #1 and the game changes completely. There seems to be much expectation from doting grandparents that they will be required (quite happily) to shower their grandchildren with gifts at Christmas.  I know Stella’s (and  later Daniel’s) grandparents would have fulfilled such an obligation in a heartbeat, so when Stella was just a wee thing who didn’t even know her parents’ first names, let alone Santa, we decided we needed to meet with them and negotiate a protocol for Vreede Family Christmases, to avoid future stress, disappointment and unspoken resentment (none of which are what Christmas is supposed to be about).  Luckily for us, all four grandparents were very understanding and respectful of our reasons for wanting to keep Christmas gifts to a minimum.

Growing up with a Japanese mother and a Dutch father, Christmases were never really about presents for my sister and me. Both my parents had Roman Catholic backgrounds, but neither involved gift-buying and certainly not to the extent that we Kiwis go berserk these days in the weeks leading up to Christmas. Apparently when we were very little my parents did go all-out one year and they (aka. Santa) stacked a big pile of gifts under the tree. When it was time to unwrap them, my sister and I were almost hysterical with excitement, ripping the paper open, shrieking with glee as each gift was unwrapped, and then quickly moving on to the next. As you can imagine, it was fun for my parents to watch us and they recalled it was also lots of fun to buy and make all those presents too. But they also observed that we never played with any of those toys (except the cot my mum made – I remember that). We had enough, they decided, so there was no need for us to get more just for the sake of Christmas. From that Christmas on, we didn’t really get presents and my parents donated money to people who didn’t have enough – often it went to the Salvation Army or the Women’s Refuge. We still celebrated Christmas; Mum always made an extra effort with the food, Dad would retell the story of the Nativity, and we’d always spend Christmas Eve sitting around the tree with the lights on (the same 40-year-old lights that are on my tree this year!), talking and enjoying each other’s company. It just wasn’t about presents, that’s all. I won’t deny that it stinks a bit when all your friends are getting heaps of cool stuff on the one day and you’re not, but guess what? I had an absolutely magical Christmas one year. We were living in Japan and it snowed. We took a train into the mountains where we visited some American friends for the night. They cooked a big Christmas dinner and had decorated their house from head to toe. My sister and I went out into the snow and made snowmen (complete with carrot noses), then came inside to discover that my parents had secretly been stashing presents under the couch for an entire year!!! 😲😲 Not only did we get lots of amazing presents, but we got them when we had absolutely no expectation of receiving any. I can remember that Christmas now like it was last week; I don’t think I will ever forget it. I didn’t have a deprived childhood. That one extraordinary Christmas made up for all the other predictable Christmases I might have had before or after. So now as a mum myself, I don’t worry that I’m depriving my children of a happy childhood by keeping presents to a rea—-l minimum just because I want to live a low-waste life. The magic of Christmas doesn’t come from going through the motions of gift-giving just because that’s what everyone does at Christmas time.

The first Christmas we celebrated with our kids and their grandparents, we agreed to do handmade or hand-me-down gifts only. All of us agreed that it was a really lovely Christmas. We weren’t each able to give gifts to everyone, because when you have to make things yourself there’s only so much you can achieve unless you’re planning for Christmas from the 1st of January…🙄 As a mum of a 3-year-old and a 1-year-old, I didn’t have much time for present-making so I made bliss balls for everyone. My mother-in-law was a spinner, and she gave me a skein of hand-dyed hand-spun wool (which I later knitted into a vest for Stella). My father-in-law upcycled an old garden fork by carving a new left-handed wooden handle and polishing the steel so I could see my reflection in it! When someone gives you a handmade gift, you can feel how much time and energy they’ve invested in you. You know you are receiving something which is likely the only one of its kind (unless it’s a bliss ball, haha!). I am sure that when I make gifts for my children they can feel the undivided attention I’ve invested – not in them exactly, because they were asleep or out when I was sewing or painting or knitting, but it’s almost like it makes no difference to them anyway. As though I’ve just spent hours and hours being just with them.

We had another hand-made Christmas the following year which was even more fun, because the kids were just that little bit older, and we invited some friends over for Christmas lunch/dinner (the more the merrier!). Then last Christmas my sister, her husband and their three kids joined us for Christmas, along with my cousin and her two kids, and my aunt. With so many more “normal” people to consider, we agreed to bend our handmade rules so that everyone could be happy. We agreed that if we couldn’t do hand-made or hand-me-down, then bought second-hand or handmade in New Zealand would be just as awesome. That way, even though we were buying our gifts, our money was either going to a charitable cause (like St John’s or the Salvation Army) or it was going to another New Zealander – a real person on the other side of the product, and supporting their dream by rewarding them for their skill and effort. It was a huge success! My sister even wrapped her gifts in newspaper, bless her!

This year, we’re back to celebrating Christmas with just the grandparents and us. It’s going to be low-key and simple, all about family time and good food. Now 5-and-a-half and going to school, Stella is more informed about who Santa is and the role he plays at Christmas. So this year I decided to roll with the Santa story and I explained to her and Daniel about how he lives in the North Pole and spends his whole year making presents for children. Then on Christmas Eve he is magically able to fly all around the world and deliver each child a gift while they are sleeping. They are not concerned with the logistics of this because everything can be magical when you are 5 and 3! We sat down together one day and composed letters to Santa (Daniel dictated his 😂), first introducing ourselves, then explaining how we have been kind and helpful this year, and lastly requesting one thing from Santa this year. And drawing a picture of it on the back of the paper.  Unfortunately, I left this exercise a little late so I explained to Stella that instead of mailing the letters, I’d scanned and emailed them to Santa directly so he would receive them immediately. The kids were satisfied with this arrangement, and are now eagerly anticipating the delivery of one yellow “jeep” and one fluffy red strawberry with a smiley face on it. 😂😂😂 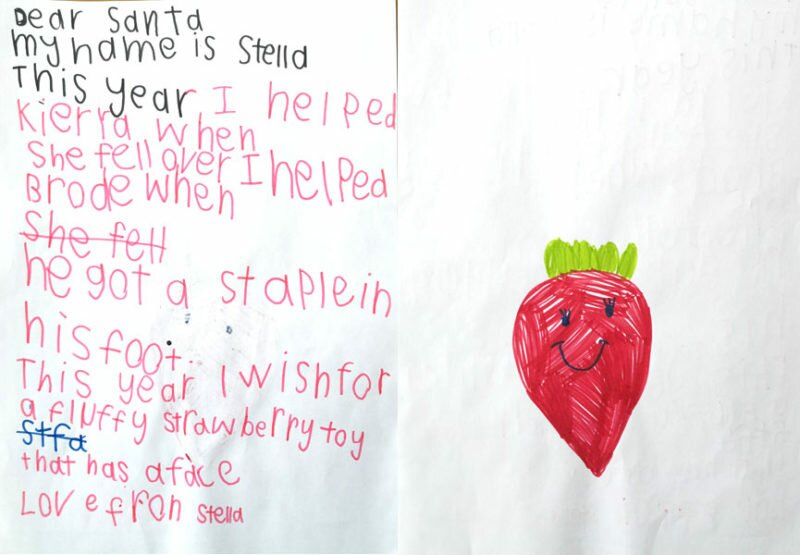 So I am now spending my evenings sewing a big fluffy red strawberry with a smiley face on it (and I must say it’s looking very promising!). But here’s my less than perfect ending to the story: we have bought Daniel a plastic yellow digger. A remote control digger. Not handmade, not second-hand, not even made in New Zealand. Because we’re only human. Do we feel guilty? No we don’t. Not even a little bit. Because the goal was never to be perfect, it was to be sustainable. And we truly believe that balance is the key to us making our lives truly sustainable, even at Christmas time.

I made our Christmas tree a few years ago, out of scrap wood. It is mounted to the wall with two screws because at the time we had no space for an actual tree. The tinsel and many of the decorations are almost as old as me!

Also, if you’re interested, here is the link to the NZ Herald story about our handmade Christmases:
NZ Herald Local Focus: Esther Vreede’s waste-free Christmas with handmade gifts only 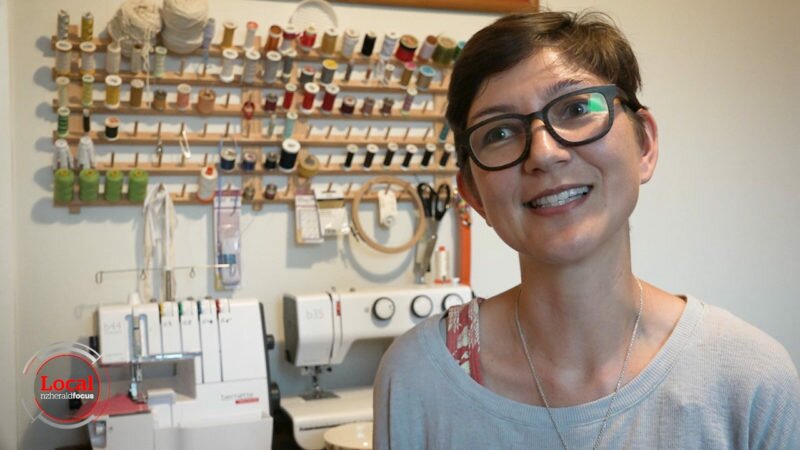