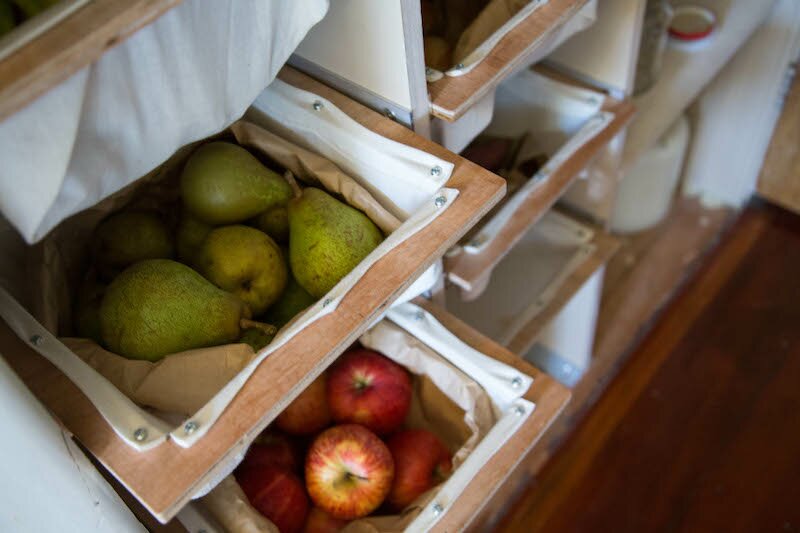 Growing up, I only ever recall storing our vegetables in the plastic bins at the bottom of the fridge.  Now that we don’t use them anymore I have to say that I found them so irritating!  Like cutlery drawers, those vege drawers would always fill up with debris that I just never got around to cleaning because it was such a hassle.  They never fit in the sink which was just annoying.

When we decided to try plastic-free living I wondered, for the first time in my life, what people used to do before they had plastic vege drawers in fridges.  A little googling on how to store vegetables without plastic revealed a fantastic resource compiled by the Berkeley Farmers’ Markets in California, titled “Storing Fruits and Vegetables”  which lists just about any fruit and vegetable you can think of and how you can keep them looking, feeling, and tasting fresh without using plastic.  At the time I found this information it was asparagus season, so we tried storing our fresh asparagus in a glass vase on the kitchen counter.  We changed the water daily, just like you would for fresh flowers.  It was a revelation: the asparagus kept better in a vase of water than it did in the vege drawers, wrapped in a plastic bag.  The only word that could accurately describe our reaction to this discovery was, “D’oh!” (now an officially recognised word in the English language, haha.)

So the plastic vege bins have now been rejected from our fridge, which conveniently leaves room for our glass milk and kombucha bottles.  We store some vegetables, like carrots and broccoli, in glass containers with plastic clip-on lids, and sometimes we put a damp cloth in with them.  The rest get stored on the kitchen counter, if necessary (I prefer a minimalist counter top with as few items standing around as possible!); or in my prototype produce drawers.

These cloth drawers were a customised solution to an awkwardly shallow pantry space in our old house.  As we switched to eating more fresh food, we found a fruit bowl just wasn’t cutting it anymore.  Plus, there’s that annoying issue with fruit bowls when your fruit ripens too quickly or when it over-ripens when placed with other fruit.  Bananas are the worst!  Fruit bowls also have a habit of taking up valuable counter space.  So the idea for these drawers was that each fruit or vegetable would have its own space, and I figured that if I made them out of cloth (this is recycled calico) I would avoid rot by allowing everything to breathe. 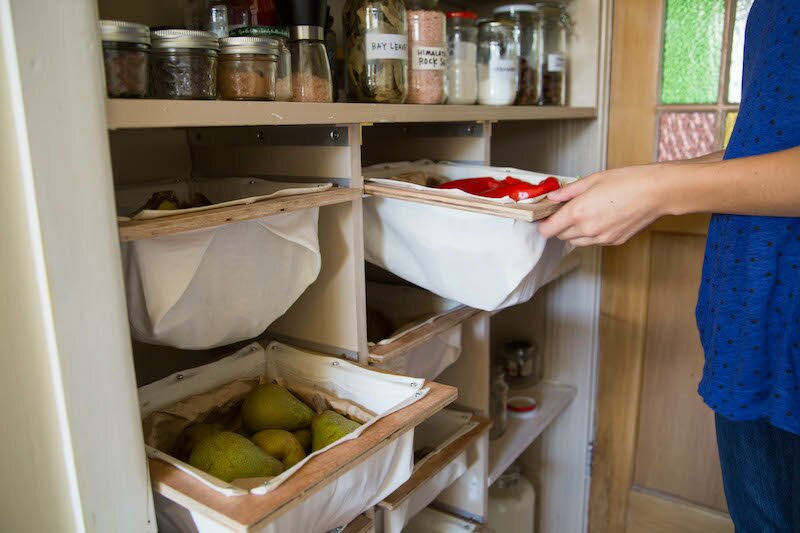 When I get a chance, I will improve on my design, although they do work very well for now.  As you can see, I’ve had to put everything in paper bags, which I won’t need to do if I can tweak these so the calico can be removed easily and washed.  I used eyelets on the fabric to screw it to the plywood frames, but they were a little small and in some places the fabric has popped out a bit; I didn’t really think about how heavy a bag of apples or pears would be!  Daniel, now a toddler, went through a phase where he was helping himself to morning and afternoon tea, with snacks in-between, but he’s learned that those drawers are out of bounds now, whew!  For a while there, I thought we had mice, but it was just Daniel exercising his new baby teeth, haha.

So far, vegetables like onions, potatoes and kumara are very happy in my produce drawers.  It’s dry, well-ventilated, and their shelves are nice and dark behind the door.  Because everything except the eyelets and screws was recycled, this has proved to be a very cheap, practical way of storing most of our fruit and vegetables without plastic.  I would like to share a how-to tutorial for making these fabric drawers, but first I want to perfect and simplify my design even more so I’m not quite ready for that yet.  Stay tuned.