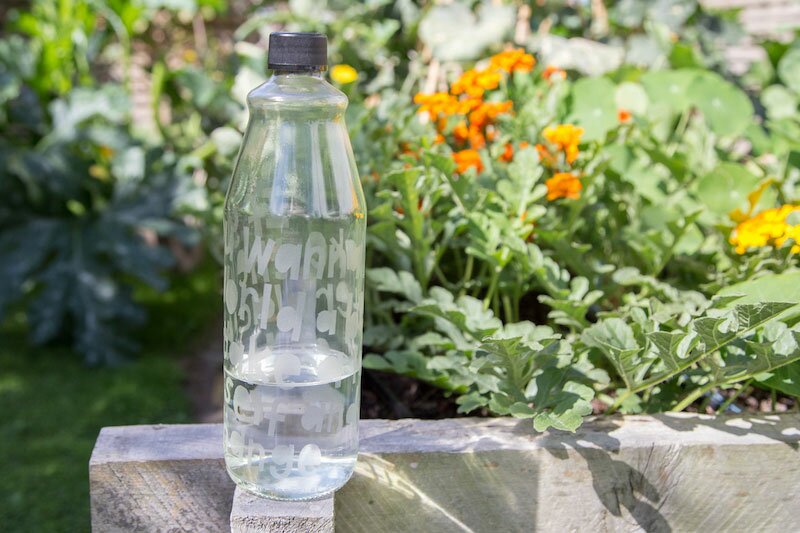 One of the first commonly used items we switched away from plastic was our water bottles.  Plastic is an enduringly popular choice for drink bottles, despite health risks, because it’s cheap and just plain practical.  There is no denying that silicone covered glass or stainless steel water bottles are significantly more expensive than plastic bottles, BPA-free or not.  I was a teenager in my first years of high school when the sippy-top plastic water bottles like “Pump” and “H2Go” came into fashion.  Everyone at school could carry a bottle of water with them into class, and sip on it throughout lessons.  It was a completely affordable accessory that you could easily replace when it got too beat-up for your liking.  I used to think I was doing a good thing by saving and refilling my Pump bottle with tap water.  Then, later in life, I heard about BPA (a synthetic oestrogen used in many plastics which has hormone-disrupting properties) and was sufficiently scared into using either BPA-free plastics or plastic alternatives such as glass or stainless steel, instead.  More recently, I have discovered that even BPA-free plastics are not necessarily as safe as many advertisements (particularly for baby products) would like you to believe.  It would seem that BPA (bisphenol-A) substitutes are just as bad, if not even worse than the scary chemical they replace – eek!  It’s all too much to keep up with, in my opinion.  So that’s why I prefer to just avoid plastic altogether where possible and practical.

Everyone in my family has their own water bottle, and not one of them is plastic (apart from drinking spouts and lids – practical).  When Stella was a newborn and we switched her to formula, I felt that at least if I had to give her formula, I could give it in a glass bottle.  We used glass Nuk bottles right from the start and three years later the little bottle we first used with her, then turned into a sippy cup (by switching teats), then passed on to her little brother Daniel, still looks as good as new.  In three years, we’ve lost only one glass baby bottle when I dropped it on a concrete floor in a cafe (d’oh).  Otherwise, we’ve had no breakages and we’ve been able to pass our no-longer-needed baby bottles on to friends.

Stella’s first drink bottle as a toddler was a Kleen Kanteen sipper bottle (in cactus pink – so cute!) and while the plastic sipper top was slightly awkwardly designed, she loved it, and it has the dings and dents to prove it.  We decided it was time for an upgrade when I noticed the plastic around the mouthpiece was starting to flake off from her having gnawed at it so much.  I decided to try the (NZ made) Haakaa insulated stainless steel drink bottle with silicone straw.  While I’m not entirely sure about the safety of silicone, the straw and flip-top are undeniably practical in terms of leaking and toddler interest!  Stella loves her drink bottle and now Daniel has one too.  Both were a serious investment for frugal parents, so we immediately got them engraved with surname and phone number on the bottom.  So far they have been worth every dollar.

We tried Daniel on a Greenkids sipper bottle for a wee while but switched him to the straw Haakaa bottle pretty quickly, as it didn’t really offer any features that the Nuk glass bottle or the Haakaa steel bottle didn’t do better.  I consider it an impulse buy that we didn’t really end up needing or using much.

For myself, I splurged on a silicone-covered glass LifeFactory bottle shortly after Daniel was born.  I decided to treat myself to this very expensive (but very stylish!) glass drink bottle as a reward for making it through the first weeks of breastfeeding, with the need to stay hydrated as my justification!  I used it for about a year and loved it, mostly because it looks good and water from a glass vessel just tastes better than from plastic or steel.  However, I can’t deny it has two weaknesses.  Firstly, it is heavy.  Secondly, that darn screw top is as good as not having a lid at all if you don’t check it’s on straight and perfect!  After I arrived at a friend’s to find 500ml of water in the baby bag, I thought that a mental note would be enough to remind me to check the lid was on properly in future.  Alas, it was not.  I have since emptied 500ml of water all over my front a number of times; the worst, when I went to take a swig of water for my parched throat in the middle of the night… 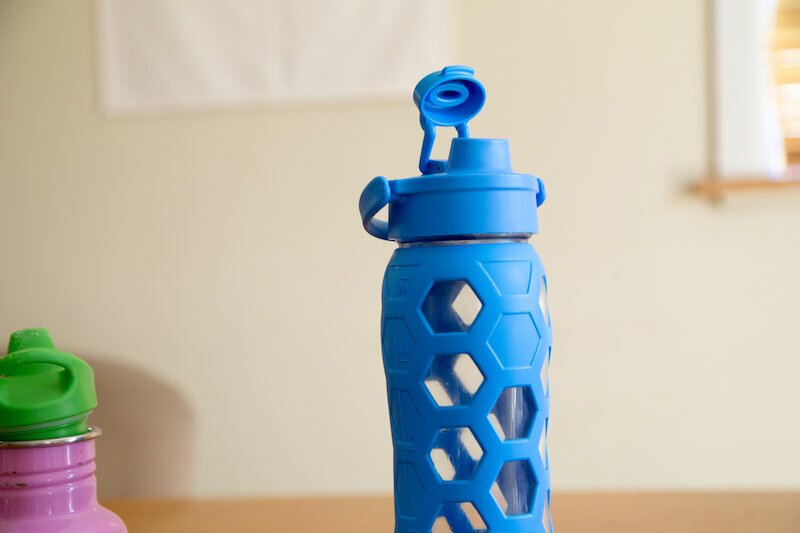 As you can imagine, I eventually got sick of mopping up puddles of spilled water due to my own absent-mindedness and inability to screw a cap on straight.  So I donated my beautiful LifeFactory bottle to my husband and switched to the cheapest water bottle of them all: a repurposed glass apple cider vinegar bottle with a screw-cap lid.  To give it the je-ne-sais-quoi it desperately needed, I stencilled a very inspiring quote by the late Michael Jackson around the glass using Duraseal, then sent husband off to work to bead-blast it for me :).  It came up beautifully!  And even he agrees (while sipping from my cast-off), that my apple cider vinegar water bottle is the nicest bottle to drink from out of all of them!  Proof that you don’t have to spend a fortune on fancy designs and gorgeous styling in order to choose a healthier, more sustainable and more stylish, alternative to plastic water bottles.  I’ve had this bottle for two, maybe three years now and it’s as yet unbroken (touch wood), even without a fancy silicone sleeve.

“If you wanna make the world a better place take a look at yourself and make the change.” – Michael Jackson