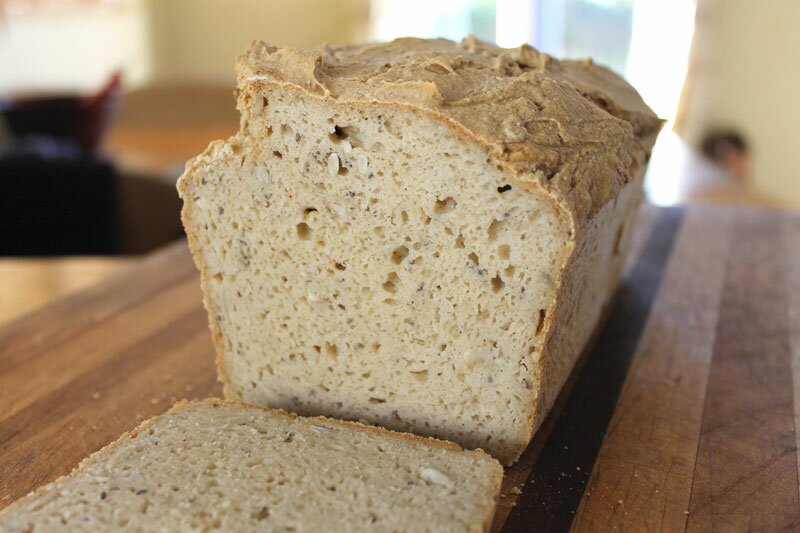 Late last year I decided to switch to a gluten-free lifestyle to see if I could improve my health through my diet.  Well actually, it was more about eschewing wheat in particular, rather than about me believing I’m an undiagnosed coeliac or thinking that I have a gluten intolerance.  It seems to me that wheat is starting to stand out as a real irritant for lots of people – and interestingly, even vets recognise it as one of the two most common dog irritants (along with beef).  I’m not going to pretend that I know why, because I’m no scientist, farmer, or health expert; but as soon as you start to read around on ‘gut health’ or any ‘gut disorders’, wheat and dairy come up almost every time as being the number 1 and 2 foods to eliminate if you want to give your guts a break and a chance to heal.  I wrote my last blog post about how I wanted to balance my hormones through dietary improvements, but wheat was already in my firing line for being high in fructans (a vegetable form of fructose) and a possible cause for excessive gas and digestive discomfort.

Before going down this gluten-free path, I was already mad about sourdough bread and we were all eating my homemade traditional sourdough bread daily (and loving it).  Even though it’s made with wheat flour, sourdough bread can be tolerated by some gluten-intolerant people because the slow fermentation process degrades the gluten, and although they are cooked to death, the beneficial bacteria seem to still have an anti-inflammatory effect on your digestive system.  It seemed silly to me to switch from such a nutritious, healthy form of bread, albeit wheat based, to a highly refined, instant-food kind of gluten-free bread. (Read the linked articles at the bottom of this post to find out why I’m not a fan of ordinary gluten-free bread.)   So naturally, I began exploring the possibility of a gluten-free sourdough bread. (I checked on google, and yes it was possible! 😀 )

My first attempt at baking a gluten-free sourdough was yuck – I think there’s no need to expand on that descriptor, suffice to say that I baked quite a few bricks to begin with 😛 . My early attempts turned into a crumbly mess that piled up in the bottom of our toaster.  So I decided to pay the experts and I bought a loaf of Flaveur‘s gluten-free seeded sourdough bread.  To date, this is my favourite gluten-free bread I’ve bought, hands down.  I would love it even if I didn’t care about gluten.  It’s moist, tasty, edible without toasting – and it didn’t crumble apart in my toaster either!  I was now resolved more than ever to bake my own loaf that tasted this good.  You might wonder why, when I could just buy it ready-made?  Because gluten-free sourdough bread like this is REALLY expensive ($7+ per loaf).  This is fine for the odd loaf, when you’re eating just one a week or so. But I’m raising two giants (one of them a male giant) alongside a giant husband, all of whom have giant-sized appetites for bread.  And I’m not into the idea of having one kind of bread for mummy and one kind of bread for everyone else – as far as I’m concerned, what’s good for the goose is good for everyone else, and we should all be eating the same foods, together.

My experimentation in search of the ultimately edible sandwich-friendly, kid-friendly, husband-friendly gluten-free sourdough has resulted in a lot of bird food and compost over the past few months.  I tried to keep the list of ingredients as short as possible and as simple as possible, and I wanted to avoid all gums (these are usually added to gluten-free baking to prevent everything from crumbling like mine did).  In the end, I caved and tried a loaf with xanthan gum (organic, GMO-free, etc etc) and it was like magic.  The resulting loaf (and the recipe I’m about to share with you) was spongy, light, and didn’t disintegrate in my toaster! It freezes well, toasts well, slices well. It can be eaten fresh as sandwich bread, and it’s even better when toasted (FYI, it takes a little longer to toast than wheat bread).  Most importantly, it’s yummy and everyone who’s tried it has liked it and found it eminently edible.  It’s a low-effort recipe, requiring no special gadgets or elbow grease, but it does take time (waiting time) so you can’t just look in your bread bin, realise it’s empty, and whip up another loaf ready to eat an hour later.

I did a quick cost calculation of ingredients and found it came to $3.64 per loaf, including a number of organic ingredients, BUT I’m a bit disappointed to update that figure now with a revised $5.52 per loaf plus the cost of the xanthan gum (it’s expensive to buy but you don’t use much) since I added free-range eggs and NZ olive oil to the recipe.  I guess it’s not going to save tonnes of money after all – unless you have your own chickens – but I will continue to bake this bread for us because: 1. I know what’s in it and the ingredients are of the highest quality, 2. It’s zero waste and plastic bag free, 3. It tastes better than any GF bread I’ve bought, 4. It’s still cheaper than the store-bought GF sourdough breads (and it’s a bigger loaf too), and 5. I enjoy making our food.

Ok, so now I’ve convinced you of its awesomeness, let’s get on to the recipe. Skip right down to the bottom of this post if you just want to read the recipe card!

Firstly, you will need a cup of active gluten-free sourdough starter at the ready. I use a 100% brown rice flour starter that I brought to life from rice flour and water using the instructions of “Whole New Mum“.  I’m impatient so I decided to kick-start it into action by adding 1tsp whey from our milk kefir.  Because I did this in summer, my sourdough starter was alive and ready for action within 2-3 days.  I’ve noticed the gluten-free starter is much hungrier than my old wheat flour starter, so I need to feed this one about 4 hours before I want to use it. (I also keep my GF starter in the fridge in-between bakes to slow it down and keep it really low-maintenance.)  I’m also a seed-soaker so I make sure I have some sunflower seeds soaking in advance too (Update: I now add ¼C pumpkin seeds in with the sunflower seeds). 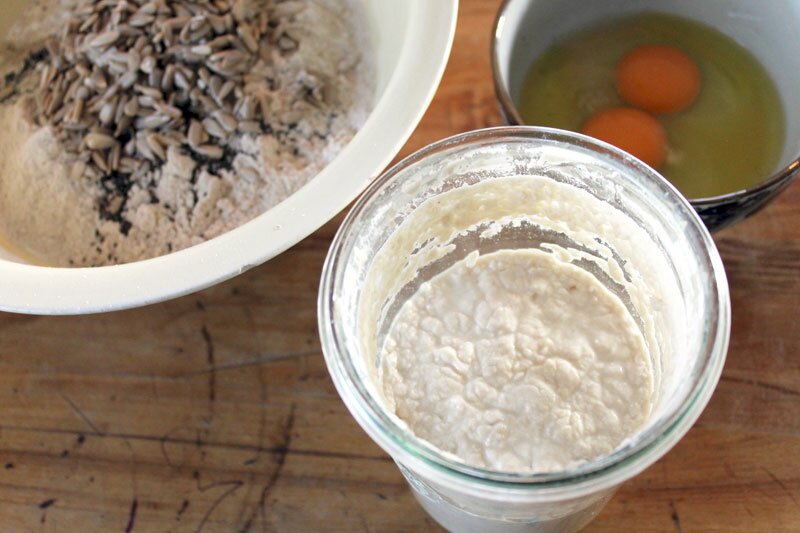 To begin, I start with a large mixing bowl and I add all the dry ingredients: the flours, salt, chia seeds, guar gum, and strained sunflower (and pumpkin) seeds. I stir them together with a wooden spoon, then make a well in the middle.  In another smaller bowl, I add the eggs, olive oil, and apple cider vinegar. I whisk these together with a fork (no fancy equipment needed here!) and pour it all into the large mixing bowl. Next, I add 1 cup of the sourdough starter and 1 cup of filtered water and mix everything together with the wooden spoon. As the water is quickly absorbed by the flour, I add the remaining water and stir it all together, scraping the bottom regularly to make sure I haven’t missed any pockets of flour. 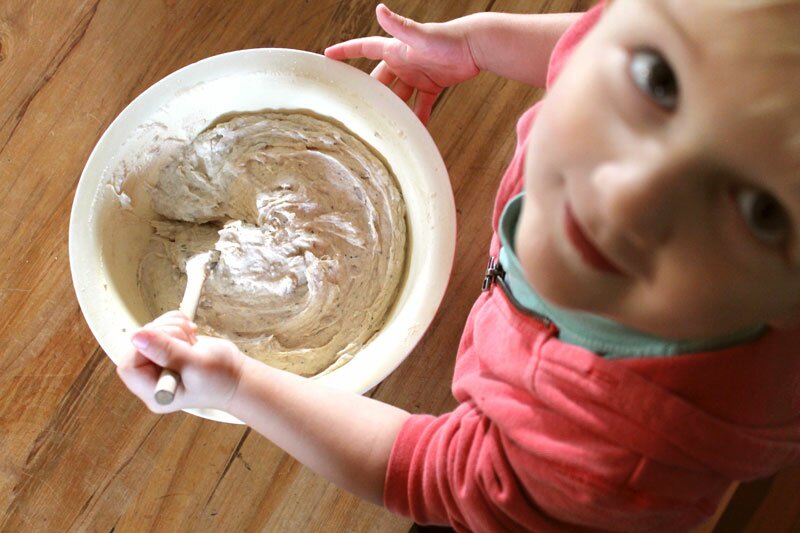 When it’s all mixed together well and it’s a sort of gluggy thick consistency, I flatten it out with the spoon, cover the bowl and place it in the fridge until its risen and formed a bit of a dome. This takes up to 24 hours lately, but I guess if you wanted to bake it sooner you could leave it out at room temperature and it should rise much faster.  (Update: it’s winter now, so I’ve been leaving my dough out on the kitchen bench overnight, covered with a plate. In the morning it’s ready to bake and I think the finished loaf has less cracking on top for having risen more fully before baking.) 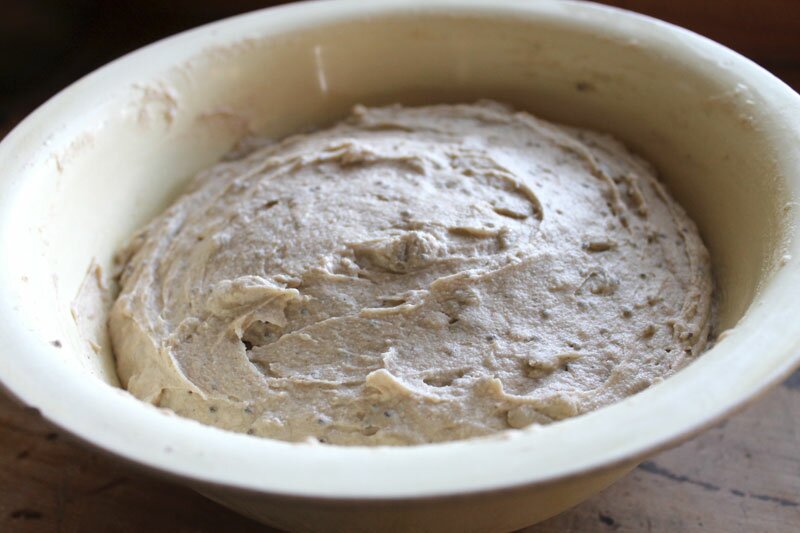 When it looks like this I take it out and transfer the dough into a greased loaf pan (I use a glass one and the bread never sticks to the pan so long as I grease it with butter).  I bake this bread at 180°C from a cold oven for 1 hour 15 minutes, and I like to put a dish with a bit of boiled water into the oven as well – I’m no baker but I understand that the steam from the hot water helps to make a crispy crust.  I haven’t taken the time to investigate this idea further so it may be a silly habit I do in vain, but every time I pull my cooked bread loaf out of the oven, it looks just like this: 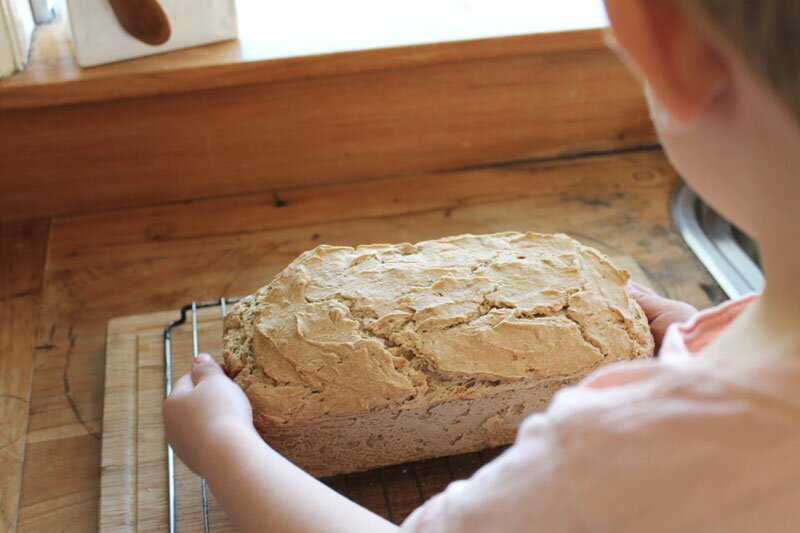 I do wait for it to cool before slicing it.  It keeps very well for a couple of days wrapped in a tea towel in our bread bin, but longer than three days or so and it did start to get fuzzy mould in summer.  I now keep half in the fridge and half in the bread bin just in case.  It freezes well too 🙂 .

I’ve very consciously decided not to keep this recipe a secret because I believe that healthy, delicious food should be available to EVERYONE. You are most welcome to bake this bread, share it with others, and share the recipe with your friends and family.  If you love it as much as we do, and you think it’s worthy, I hope you will consider buying the recipe as a gesture of thanks, simply for the cost and effort I put into developing it.  However, if you can’t or don’t want to, that’s fine also – I will never think the worse of any of my readers! Thank you, Esther x

(Please note the currency is in New Zealand dollars!) 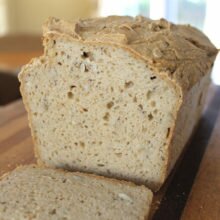 * You can substitute the rice flour with oat flour, as I’ve been doing for a few months after reading about concerns regarding arsenic in rice flour (brown rice contains higher levels of it than white rice, apparently). I’ve recently switched back to rice flour though, as the oat flour version is a wee bit drier than the rice flour bread. Because we don’t really eat processed food I’m ok with using brown rice flour for our bread as we don’t really eat much rice anymore anyway. If you’re interested, Dr. Axe has written an article about the awesomeness of oat flour: https://draxe.com/oat-flour/.

FYI, here are some interesting articles I read about gluten-free diets and the benefits of fermenting:

2. “Looking Beyond Gluten-free: Choose a gut-supportive diet for long-term health with celiac disease”

3. “The only bread you should eat”